B&B-AGEMA will attend the International Gas Turbine Congress and show its products and the area of operation in an own booth. Members of the company will present three publications on nowadays research topics: Further on, B&B-AGEMA is participated on a common publication of its business partner Kawasaki Heavy Industries (KHI) on the research project:
“Application of Low NOx Micro-Mix Hydrogen Combustion to 2MW Class Industrial Gas Turbine Combustor” (Horikawa, A., et al.)

Since September 2019, the B&B-AGEMA is a member of the ASUE, the "Arbeitsgemeinschaft für sparsamen und umweltfreundlichen Energieverbrauch e.V.". ( Consortium for economical and environmentally friendly energy use)

B&B-AGEMA attends the conference and presents on “Development of an Air Cooled Borescope for Flame Monitoring in an Experimental DLE Hydrogen Combustor”.

B&B-AGEMA will present on “AN INNOVATIVE FLEET CONDITION MONITORING CONCEPT FOR A 2MW GAS TURBINE” showing the performance and experiences with B&B-AGEMA Software “GTPtracker”, a centralized gas turbine fleet performance tracking and condition monitoring software tool at this years IGTC.

B&B-AGEMA will attend the European Turbomachinery Conference in Stockholm, April 2017 and presents 1 publication. We look forward to meeting you in Stockholm.

"The Thermal and Nuclear Power" Journal, February 2017, B&B-Article in Japanese

B&B-AGEMA GmbH has published a technical article on the newly developed F-CHT analysis to February 2017 issue of "The Thermal and Nuclear Power" Journal. The title is "Frozen-CHT Analysis of the Transient Thermal Behavior and Life Prediction of 700°C Steam Parts". The thermal behavior of a steam by-pass valve subject to cyclic operation with 700°C steam was investigated by newly developed Frozen-CHT approach. The results showed good agreement with measurement results. The approach was applied to transient thermal analysis of a high pressure turbine casing as well.

B&B-AGEMA supports the SGT5-4000F User Conference this October (11.-13.10.2016) in Helsinki. At our booth near the entrance to the conference rooms, our Senior Expert, Dr.-Ing. Bernard Becker, is available for participants to discuss about technology and operation experiences of the gas turbine. Before attending B&B-AGEMA, Dr. Becker was head of Siemens gas turbine development in Mülheim.

President and founder of B&B-AGEMA Prof. Dr.-Ing. Dieter Bohn is attending the special day „failure of gas turbines“ of the 10. VDI congress for stationary gas turbines in Nürnberg in November. Together with Dr. Klaus Schippers, he gives a lecture about the “design of gas turbines”, “root cause of failures”, and “measures for avoidance of failures and damage".

Dr. Takao Sugimoto will present at the TENPES convention "Numerical Investigations and life assesment by Frozen CHT method of the Transient Thermal Behavior of a Steam Bypass Valve at Steam Temperatures Beyond 700 °C"

B&B-AGEMA GmbH is honoured by being accepted as a corporate member of the Gas Turbine Society of Japan (GTSJ). We are looking much forward to emphasizing our efforts on the collaborations with Japanese OEM and power plant operators.
Contributing Organizations to GTSJ

Dr. Karsten Kusterer, CEO of B&B-AGEMA, has presented at the Star Korean Conference, 15. June 2016, on "Advanced Design Capabilities for Innovative Cooling Systems of Highest-efficient Industrial Gas Turbines".
Abstract:
Gas turbines are of significant importance in public and industrial power and heat generation. In order to address the diversity of market demands, an industrial gas turbine system of highest efficiency in its class and enhanced operational flexibility has been developed. The key factor in the design process was the application of advanced cooling technologies based on modern computational simulation and analyses systems as provided within Star-CCM+. The complex cooling task is explained for the first vane nozzle of the gas turbine showing simulation results as well as measurement results from the test engine. For higher effectiveness of the film-cooling also an innovative film cooling technology has been developed. Increasing the film cooling effectiveness has been possible by innovative cooling hole geometries and the generation of so-called Anti-Counter-Rotating Vortices (ACRV), which enable the cooling air to remain close to the surface to be cooled. The design parameters of the cooling holes have a crucial impact to the film cooling effectives behind the hole. These design parameters are varied and optimized in order to show the capabilities of the technology. Since the design parameters influence each other and the composition governs the result, an automated optimization tool (Heeds/Optimate+) has been utilized.

It was a great pleasure meeting you in Seoul.

The conjugate heat transfer (CHT) calculation technique is used for the three-dimensional thermal load prediction of an extensively cooled 1st nozzle test vane installed in a highest-efficient industrial gas turbine. The utilized numerical model contains all geometrical features (e.g. pin-fins, ribs, impingement sheets etc.) of the real test vane without simplifications. The comparison with thermal index paint measurements inside the test engine shows that a qualitatively and quantitatively good agreement between the CHT and the measurements results can be found. A consideration of advanced-shaped film cooling holes at the vane platforms also offers high potential to further reduce the material temperatures and decrease thermal stresses by lowering of platform temperatures and homogenization of the temperature distribution.

B&B-AGEMA has attended the STAR Global Conference 2016. It was a great pleasure to meet our good friends from CD-Adapco as well as clients from all over the world again in Prague. Thank you very much for this outstanding event and the chance to contribute with our presentation: 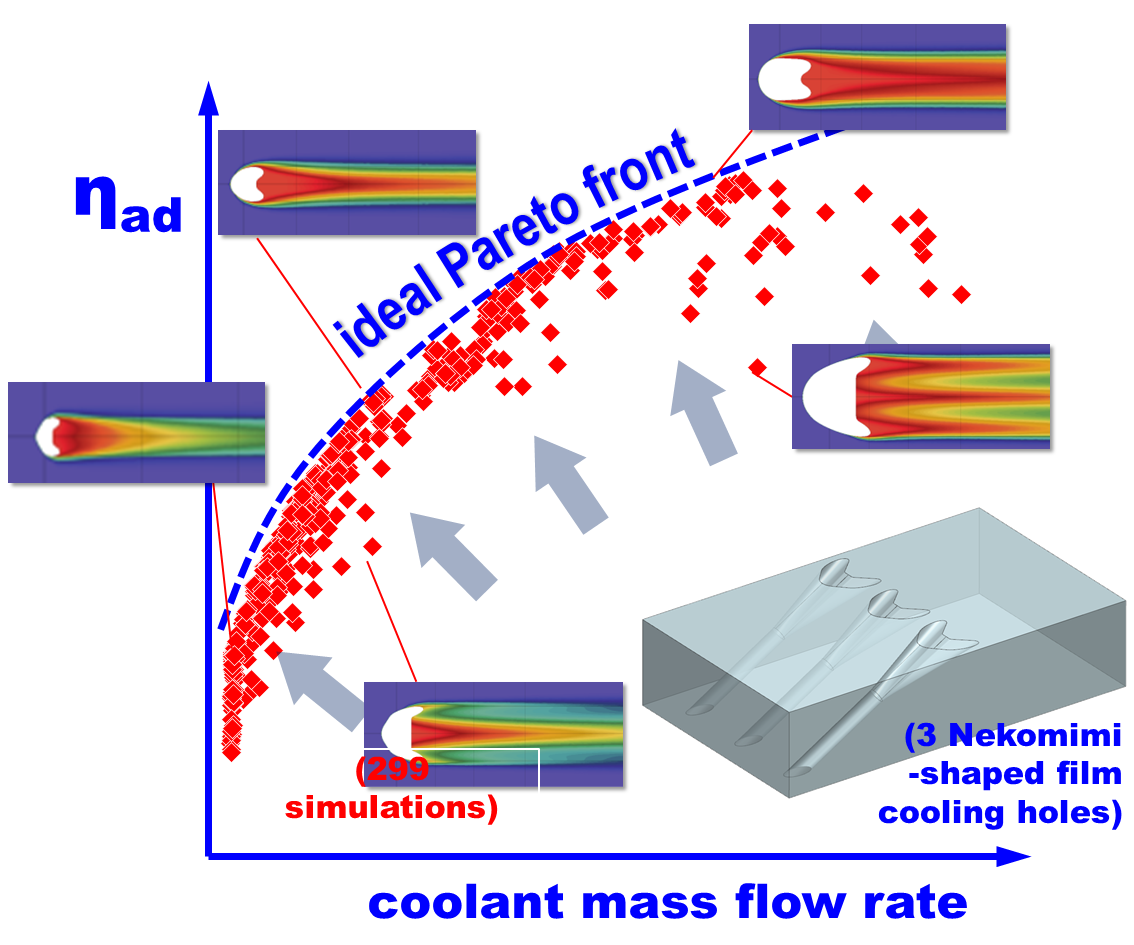 In modern gas turbines, the film cooling technology is essential for the protection of hot parts. Today, shaped holes are widely used, but besides others, the NEKOMIMI-shaped cooling holes have shown that there is still potential to increase the film cooling effectiveness by generation of Anti-Counter-Rotating Vortices (ACRV). As a result, the cooling air remains close to the wall and spreads in lateral direction along the surface. The ACRV result from the special shape of the expanding hole exits (NEKOMIMI-shape). Thus, the design parameters have a crucial impact to the film cooling effectiveness behind the hole. In this study the design parameters are varied and optimized within a multi-objective Pareto optimization in order to show the capabilities of the technology and the potential of HEEDS and Optimate+ for automated design space explorations.

B&B-AGEMA has attended IGTC in Tokyo, Nov 15-20, 2015. We had a booth at the exhibition and three papers on the conference. It was a great pleasure to meeting you in Tokyo!

B&B-AGEMA has presented 2 publications at ASME Turbo Expo in Montreal. We invite you to visit us at our joined booth with CD-adapco at the exposition.

Dr. Karsten Kusterer, CEO of B&B-AGEMA, will present at the VGB conference "Gas Turbines and Operation of Gas Turbines", 06/07 May 2015 on: "Innovative Cooling and Combustion Systems for Industrial Gas Turbines of Highest Efficiency".

A certificate of appreciation has been provided to Dr. Karsten Kusterer, CEO of B&B-AGEMA by Dr. Minoru Makimura, Senior Vice President of Kawasaki Heavy Industries, LTD. for his contribution to the Kawasaki Hydrogen project. 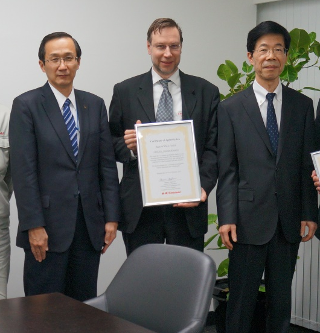 The new version of TDT can handle splitting and mixing of fluid flows and calculate combustors with oxygen injection.

B&B-AGEMA will present 5 publications at ASME Turbo Expo in Düsseldorf and can be found in the exhibition at the CD-adapco booth.